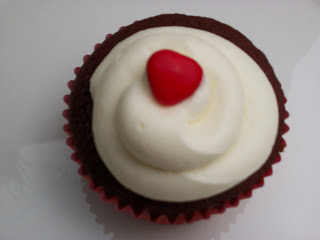 A friend asked me to make a cake for a Ruby Anniversary party.
To go with the ruby red / heart theme I also made red velvet cupcakes with a cream cheese frosting for the party.
I used the Hummingbird Bakery recipe as that had the best reviews online.
They were surprisingly easy to make and I managed to make them without covering myself or the kitchen in red food colouring. I topped off the cakes with red chocolate hearts.
I never got a chance to try one but mini me did and she loved it.
Red Velvet Cupcakes
(makes 12 cupcakes)
Ingredients:
60g Butter, room temperature
150g Caster Sugar
1 Egg
10g Cocoa Powder
20ml Red Food Colouring
½ tsp Vanilla Extract
120ml Buttermilk
150g Plain Flour
½ tsp Salt
½ tsp Bicarbonate of Soda
1 ½ tsp White Wine Vinegar
Directions:
Cream Cheese Frosting
Ingredients:
300g Icing Sugar, sifted
50g Butter, room temperature
125g cream cheese, cold
Directions:


1.     Beat the icing sugar and butter together in a freestanding electric mixer with a paddle attachment (or use a handheld electric whisk) on medium-slow speed until the mixture comes together and is well mixed. Add the cream cheese in one go and beat until it is completely incorporated. Turn the mixer up to medium-high speed. Continue beating until the frosting is light and fluffy, at least 5 mins. Do not overbeat, as it can quickly become runny.
2.     When the cupcakes are cold, spoon over the cream cheese frosting on top.
Posted by Claire at Friday, August 12, 2011