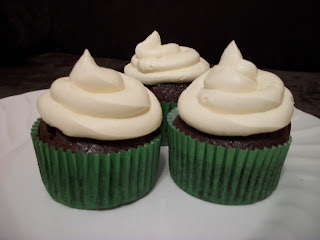 As it is St Patrick's Day (17th March 2012) I thought I would make some Guinness cupcakes. I found this recipe on the site www.offthespork.com. I've made coffee cupcakes with Baileys frosting before and they tasted delicious so I really liked the idea of combining chocolate, Guinness, whiskey and Baileys.
The Guinness makes the chocolate cake really moist and delicious. Mini me enjoyed eating the bits of the cake cut out of the middle. I found the chocolate ganache to be rather rich and I certainly couldn’t eat more than one of these cupcakes.
Would make a great Father's Day present.
Chocolate Guinness cupcakes with chocolate whiskey ganache and Baileys buttercream
For the cupcakes
Ingredients:
1 cup Guinness
225g Unsalted Butter
¾ cup Cocoa Powder
2 cups Plain Flour, sifted
2 cups Caster Sugar
1 & ½ tsp Baking Powder
¾ tsp Salt
2 Large Eggs
2/3 cup Sour Cream
Directions:
For the ganache
Ingredients:
230g good quality dark chocolate, chopped in rough pieces
2/3 cup double cream
30g Butter, room temperature
2 tsp Irish whiskey (or more to taste)
Directions:
For the Baileys buttercream
Ingredients:
250g Unsalted Butter, cut into cubes and at room temperature
3 cups Icing Sugar, sifted
2 tsp Baileys
Directions:
Posted by Claire at Saturday, March 17, 2012