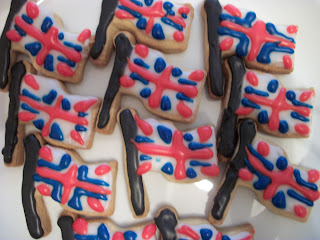 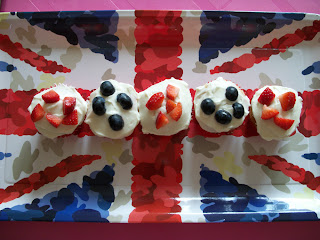 It is not long now until the Queen’s Jubilee which has inspired me to make some British themed goodies.

I had a look on the internet to get the creative juices flowing and stumbled across BakingMad. They had a special section on Union Jack cakes which got me thinking about making some Union Jack biscuits.

I used the recipe for Mini Me’s birthday party last year and they were a resounding success. They were devoured within minutes which resulted in complaints from my mum as she wasn’t quick enough to grab one.

Thinking about the best of British Cakes, I thought I would make some vanilla cupcakes using my basic sponge mix (omitting the baking powder) and topped a mascarpone frosting with strawberries and blueberries to keep with the British colours. I was pleasantly surprised to see a recipe for a low calorie Victoria Sponge cake which would be great for those who still want to celebrate but watch their weight at the same time.